This morning, our week began by watching an assembly about indoor fireworks. Matthew Tosh is a Scientist and Radio Presenter who travels the world creating lots of exciting firework displays. In the assembly, he called Miss Offer to the front and she had to hold an exploding firework. Mr Chorley thought it was like a birthday candle without the cake! She had to wear a fireproof glove and protective screen over her face to keep her safe from the fire.

Next, we had a visit from a Pilot who works for FlyBe. He showed us lots of exciting pictures from his plane and explained how he learnt to fly. He also answered lots of our questions about his career and why he chose to become a pilot. We also got to hold a model of the plane which he pilots. After he left our school, he told us that he would be flying to Holland!

In the afternoon, we met three Police dogs who were trained to attack criminals and sniff out contraband, people and money. We were able to watch one dog attack the Police officer to show us what would happen if they were faced with a dangerous criminal. After the demonstration, we were able to try on lots of equipment which the police officers used such as, a bullet proof vest and many different helmets. We also got the chance to sit inside the police car.

Overall, we have had a fantastic first day of Fantastic Futures and we are excited to see what is install for us for the remainder of the week! 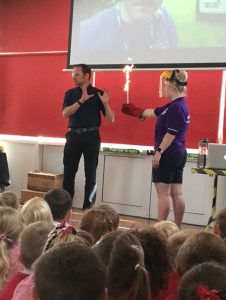